“There is nothing more important than defending innocent life,” Feenstra said. “In the Iowa Senate, I was proud that we defunded Planned Parenthood, ended taxpayer funding of abortion and defined that life begins at conception. In Congress, I’ll join President Trump as we continue to protect innocent life and create a culture of life in America. This incredibly important endorsement is further proof that I am the effective conservative leader with a proven record of defending life.”

In a letter to Feenstra announcing their endorsement, the organization said, “You have been a leader in Iowa’s State Senate on life issues. All Iowa voters in the 4th Congressional District who are concerned with the right to life and the protection of the most vulnerable members of the human family should vote to send you to Congress so that you can work to advance vital pro-life public policies.”

This week alone, Feenstra earned the endorsement of the U.S. Chamber of Commerce, the Republican Jewish Coalition and received an A Rating from the NRA, while King received an A- Rating. Feenstra has also earned the support of numerous conservative leaders and organizations, including Ambassador Terry Branstad, Iowa Family Leader President Bob Vander Plaats and more than 600 conservative county grassroots co-chairs. 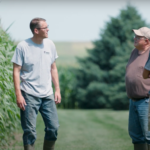